Whenever I talk to people about God, I usually get questions about this sin or that. I get questions about sickness, disease, and in general, the junk that happens to us that seems unexplainable. We are often hurt and confused by natural disasters, children being hit by cars, bombs in public places, war, poverty, famine and injustice.

People often ask if this is “God’s will” or “did God make me this way?” We know that God’s plan for us did not include brokenness.

In Genesis 1 we see that when God created everything, He said that it was good, good, good, good, good, and very good. God’s plan for His creation is perfection. However, because of sin in the world, all of creation was broken and is still broken. Even the ground produces thorns now. And our natural state is disobedience an disconnection from God.

And Paul echoes this in his letter to the Romans.

We know that all creation is still groaning and is in pain, like a woman about to give birth.
Romans 8:22 (CEV)

A Broken World and a Broken Us 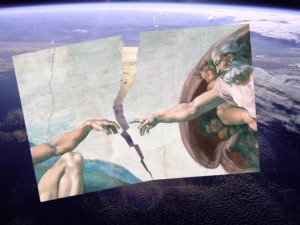 God Didn’t Leave Us That Way

Jesus was always the plan – the way to save us and redeem His creation.

God loved the people of this world so much that he gave his only Son, so that everyone who has faith in him will have eternal life and never really die.
John 3:16 (CEV)

But God showed how much he loved us by having Christ die for us, even though we were sinful.
Romans 5:8 (CEV)

That redemption, forgiveness and undeserved grace is not end of the story either!

When Jesus comes again, creation will be restored to the way God created it in the first place. We’ll have no disease, no tornadoes, no being mean to each other, no hurting one another.

Then the one sitting on the throne said:I am making everything new. Write down what I have said. My words are true and can be trusted.
Revelation 21:5 (CEV)

It’s common for us in our broken state to look around at the world in it’s broken state and want to point an angry finger at God. When we do, God is big enough to handle it. However, I pray that we embrace the goodness of who God really is and know that this is not the way He wants things. Know that His deepest desire for you is reconnection to Him and the perfection of His creation restored.

Finally, when brokenness occurs, we can be sure that he will use whatever happens to create something good.

We know that God is always at work for the good of everyone who loves him. They are the ones God has chosen for his purpose,
Romans 8:28 (CEV)

To the question about God “allowing” things to happen, it’s a common and powerful question.
I see God in the Bible only allowing stuff to happen because of our free will. We (humanity) chose/choose disobedience and so, the world is a mess. He’s not actively punishing us, but rather actively helping us to deal with the brokenness when we invite him in.