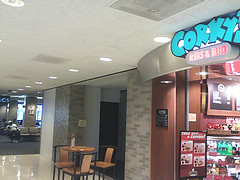 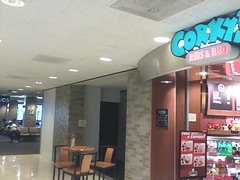 Barbeque for Breakfast? Why not?
I was in Memphis on a layover on my way to Gulfport, MS for Christmas, and there it was – heaven.

Corky’s is my favorite BBQ chain. Yes, it’s a chain, so it’s not like the Rendezvous or the Interstate in Memphis, but they do ship via Fed-ex to many parts of the USA including my home on a semi-annual basis.

All of that followed by the plane trip to Gulfport. Actually, the plane almost made it to Gulfport, but had to scoot over to Baton Rouge to land because the airport in Gulfport was broken.

The flight crew kept us on the plane and on the ground for a while before they stepped out and got us some potato chips. Moments later they decided that they were going to cancel the rest of the flight and took us off the plane to get our luggage before putting us on a 3 hour bus ride back to Gulfport.

A few minutes of standing around at the ticket counter later, they found out that the Gulfport airport was working again. So, we all gave our luggage back to the ticket agents and went back through security, and back to the plane.

Twenty-six minutes of stomach-churning turbulence later, I’m back in Gulfport and headed for the family homestead.

Merry Christmas!
God bless us… every one.