As a Christian, I expect better from my Christian brothers and sisters. It hurts more when things go wrong.

I was talking with a friend the other day, each of us have worked with and for Christian organizations and people for over 20 years. Things don’t always go well. Stuff happens. People are human. Being a Christian, and working with Christians, we tend to think we will be nicer to each other. My friend said, “You can be a Christian, and still be a jerk.” 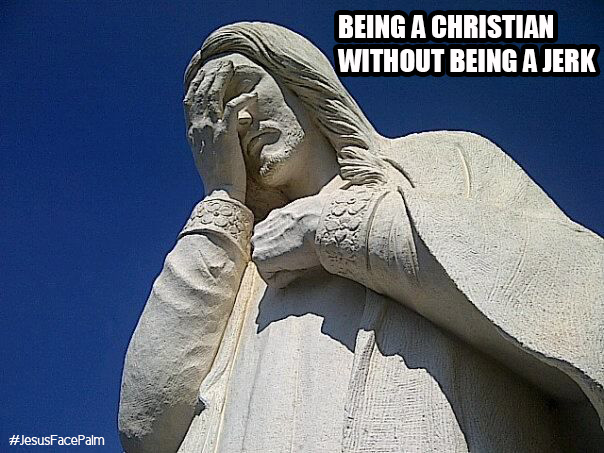 Recently, I was contracted to speak at some Christian conferences. The man who hired me talked about his vision for the conferences regularly, and was very engaging. Due to his wife’s health, he rescheduled the first conference, and said that a rescheduling fee was in the mail. It never arrived, but we’re all Christians. so I was sure it would work out. The date for the rescheduled conference came near, and there was no word about travel, and I hadn’t received the deposit check yet. The guy told me that the check was on the way, and he was working on the travel, and then he went silent.

He quit responding to emails, and didn’t return phone calls. The conference date came and went, and still nothing. I did some research and found listings on ScamExposure.com, US Complaints and Reviews, and Ripoff Report about him. A previous speaker had a similar complaint. So, I sent him a certified letter. I let him know, since he had broken the terms of our contract, I was dissolving the agreement. The letter came back unopened because he, and his organization, had vacated their place of business, without leaving a forwarding address.

I was sad, and angry. I was prepared to go speak at four conferences, and I was really excited about each one of them. My wife and I were going to use one of the trips as a vacation. I was excited about the extra money. Why would someone act like that? What did I do to him? I hadn’t done anything wrong, but the guy who signed the contract has a history of being a crook, and his behavior seemed to back that up. It occurred to me that while it’s possible to be a Christian, without being a jerk, this guy had blown it. He seems to have purposefully, and premeditatedly, chosen not to do what he said he was going to do.

Not being a jerk is more than just having integrity. It’s the way we treat each other. The Bible tells us how. In fact, Paul writes he will tell us a better way.

We often want people to change. We want people to grow up, get a life, live up to their potential, and generally become who they were meant to be, or more specifically, who we want them to be. Thankfully, it’s not our job to change other people. It is our job to make ourselves available for the Holy Spirit to change us. God wants to work on our hearts. We are often patient with ourselves when we mess up. Let’s extend that courtesy to others. More importantly, let’s keep our focus on the state of our own hearts, instead of other people’s behavior.

Treat others the way you want to be treated – The Golden Rule. You probably learned it, or at least heard it growing up. Kindness is more than that. The tricky part is to treat people better than they are treating you. It’s similar, but with a different spin. It focuses on your heart, instead of what you want. The golden rule gets us thinking that if we treat people well, they will treat us well. It focuses on what we might get out of it. Treating people better than they are treating you, puts the focus on your response to the way you’re treated.

Don’t be Boastful – Don’t be Proud

There’s a difference between boasting and pride. Boasting is making yourself seem better than you are, while pride is an undue delight in your own accomplishments. While the boasting is lying, pride, in this sense, is truthful, but self-loving. We have worked with people who love to tell us their resumes. We’ve seen people in the music business, or sports, who strut and brag. We’ve heard people talk about their children, living vicariously through them or enjoying their children’s successes as if they were their own. When our hearts are in the right place, we can be excited about a recent event, or accomplishment, without the pride or boasting.

Dishonoring someone is clearly jerk behavior. Acting in a way that is rude, shameful, unseemly, or improper toward someone doesn’t consider their importance. If you’re not going to say something nice about someone, don’t say anything. If your actions would injure someone, don’t do it. To put it in the positive, act in such a way, that you honor the other person and treat them as more important than yourself.

This sounds like something you’d tell a child. “Don’t be selfish!” Is this what adults need to be told? Sadly, it is. Of all these ways to treat others, this is where we usually fail. Selfishness is essentially thinking your desires are more important than another person. When we are selfish, we simply say, “What I want is more important than you are.” That’s pretty cold when you think about it, but it’s pretty common at the same time.

A friend of mine was once in an interview with a career counselor. The counselor told him that he shouldn’t follow a career path that involved working with kids, because he had anger management issues. My friend stood up from his chair and responded angrily, “I do not have anger management issues!” Whether it’s anger management, road rage, or speaking or acting out of anger, those are just the symptoms of being quick-tempered. Being easily provoked, irritable, or annoyed reflects poorly on the state of your heart, and mind. Lashing out at someone is one of the most common tipoff behaviors of jerks. In fact, when we see someone caught in a moment like that, our response might be, “what a jerk!”

I think this is partially for your own health. Staying angry with someone over something that happened long ago is hurtful to yourself. All it tells the other person that your anger is more important than they are. I don’t suggest that if someone has hurt you that you have to maintain a relationship with them. In the story about the conference organizer above, I’m not going to do business with him, but that doesn’t mean I need to carry around the hurt feelings for the rest of my life. If you’re holding a grudge against only one person, it still makes you the jerk, not them.

Ok, really? Does this need to be said? Yeah, it does. How many times have we rejoiced when someone gets their comeuppance? When something bad happens to someone and we think they deserve it, do we cheer? What about our choice of heroes? I love comic books. I’m a fan of comic book movies. I think the performances of the Joker character by Jack Nicholson, and Heath Ledger were amazing. I do need to check myself. It’s a fine line between appreciating an actor’s work, and celebrating the character they portray. To put it another way, don’t rejoice in unrighteousness. Don’t take pleasure in the things that keep you far from God. However, rejoice in the truth. When you live your life truthfully, and rejoice as you continue in that path and promote truth, it’s a happy life. It’s not always easy or popular, but it’s more satisfying. In this “truth” can also mean “the truth” or the Gospel. Furthering the spread of the truth about Jesus is something to celebrate.

Protect Others – Be Trusting – Be Hopeful – Be Loyal

Here is a string of positive statements that I’m sure any optimist would agree with. Do we stand up for people who aren’t there to defend themselves? Do we trust that people in our lives will have our best interests at heart? Do we hope for better times for all people? Are we loyal to our friends and family? You know who doesn’t do those things? Jerks. Imagine the opposite of each of those. That seems like a miserable existence to me. In the positive, it’s not just having a sunny disposition, but living out those positive ways tends to create one.

Yes, you can find each of those listed in 1 Corinthians 13:4-8. It’s not just the wedding scripture read at countless nuptials. It’s meant to be a bit of a checklist for ourselves, our hearts, minds, and actions. Check 1 Corinthians 12:31 where Paul leads into that section of his letter to the Corinthian Church by saying, “I will show you a much better way.”

I certainly started writing this as a way to express my anger and sadness over a recent disappointing event when dealing with someone who self-identified as a Christian, and then behaved in a way that was contrary to that label. What I didn’t want to do was to simply complain about it, raise the victim flag, or call the guy to repentance. Sure, I hope he sees the error of his ways. I hope he realizes that he’s been committing fraud, and wants to change. The thing is, I don’t have any real control or influence over him and his behavior. What I can change, is the state of my own heart. In that, I want to be sure that, rather than criticize, I create something better. Following Paul’s writing, promoting a better way is far preferable to continuing or repeating the way of the jerk.

If you’re a Christian, have you seen your own jerk-moments in any of these?

If you’ve known someone who acts like a jerk, but calls themselves a Christian, can you check your own response to their behavior, and be sure you don’t make it worse?

Does it seem more likely that the man putting the conference together was not actually a Christian and a jerk, but was more likely a false teacher, or wolf-in-sheep’s-clothing? Similar to what Paul warns about in 2 Corinthians 2:17 those who “peddle the word of God for profit” in this case?

2 Replies to “Being a Christian Without being a Jerk”