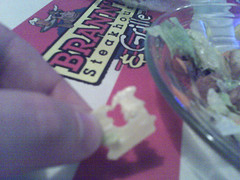 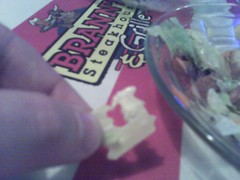 I just had dinner with my friend MarkA at Brann’s steakhouse. Brann’s is a local chain who claims to have invented the “sizzler steak” – which is just a cheap cut of sirloin in a large, thick wedge. The food is usually pretty good.

MarkA and I each ordered the 16oz Sizzler – on special. It came with a choice of potato, their fabulous yeast rolls with cinnamon butter, and the obligatory side-salad. The side-salad is usally the leftover refuse from a head of iceberg lettuce, a couple slices of cucumber (bluch!) and some waxy hothouse tomatoes. Red onions are optional, but the croutons are usually pretty good, and you get your choice of dressing. I chose honey-mustard.

Tonight the salad came with an extra crunchy crouton, burried in the bottom of the salad, but it came up in a bite with the rest of the nutrition-less cellulose. If you look at the picture above closely, you can see my teeth-marks.

I told the waitress and she was properly mortified. The free dessert (brownie-bites sundae) did not make up for the injury when I bit into this bag-tie. So, thanks Brann’s – you get free advertising on my blog and flickr pictures.

You also get the finger.

Actually it’s me, over and over again.