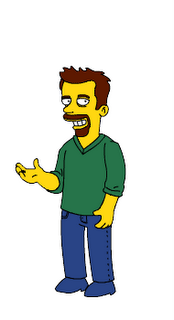 No, it’s not another name change, but a fancy gadget from Burger King and the Simpsons Movie called Simpsonize Me.

Thanks to Steve and Amy for that!

My take on the movie (no spoilers) – a really great episode in extended form, built for the theater, and pointing out all the things that they can’t do on broadcast television. I had a great time and will see it again, and likely buy the DVD.

Here’s me at the KWIK-E Mart

and in front of the Krustylu Studios