Coke – the real thing
I love Coca-Cola
It’s not too sweet, it’s crisp, bubbly, and I find it refreshing at just the right times. 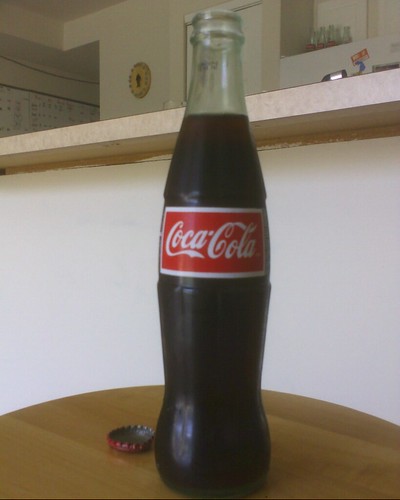 I’ve blogged about Coke before:
All Coked Up
Coke Blech
My Hero Zero

Best coke version ever is the 1984 Coca-Cola before New Coke, and before the return of Coke Classic – and it should be served chilled in a glass bottle. Growing up, this is the way it came. Sure there were cans, for the times when you had a school field trip and had to wrap it up in tin-foil. But for the most part Coke came in glass 16 oz or 12 oz bottles. Some vending machines had 10oz bottles.

The big difference between the Coke of today and the Coke of yesteryear may seem obvious to the unindoctrinated – the glass bottle? Well that’s where you’d be wrong. You can get a 6-pack of tiny 8oz bottle at the supermarket for about $5. It’s better than a can or plastic bottle, but it’s still not quite right. The difference is sugar.

Bad for you right? Maybe – but that’s what’s missing from the sweet carbonated drinks of today. Since the mid 1980’s soda companies have replaced sugar with high-fructose corn syrup. That may have been good for the farming economy, but it was still wrong.
The Coke in this picture, the one in the 12oz glass bottle, the one with a trace of condensation dripping down the side, the one that says Coca-Cola and not “Coke Classic”, the one that tastes the way Coke is supposed to, has sugar and is from Mexico.

It seems that the Mexican economy is unaffected by high-fructose corn syrup. We get their workers, they get the good Coca-Cola.

I’ve found a local source. I’m not telling you where I got it, but I bought a bunch of them and have no more than one each day.
If I told you where they were… maybe it wouldn’t be just me.

One Reply to “Coke – the real thing”