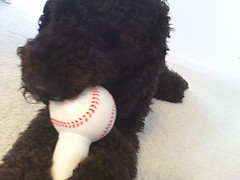 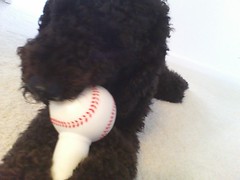 Here on brian-food, I do my best to tell people what’s going on in my life, share my observations, or simply make someone smile. The trick is to do that all within the context of food. Today, it’s a bit of a stretch, but when I saw that Walter was not only chewing his baseball toy, but had eaten a hole through it, I took this opportunity.

I should say on the outset that Walter occasionally eats his toys, rather than simply chewing them, or playing fetch. He played fetch for about 10 seconds this morning and then hunkered down to do some damage. In the last 15 minutes, he’s completely removed the baseball you see here, and has started to work on the rest of the toy. I’ll clean it up later. Now – on with the story.

Last night, my softball team had the single greatest game of our career together. Most of the guys have been playing together for the last five years, and we’ve usually finished somewhere in the middle of the pack. This Fall, we hadn’t won a single game, until last night. Final score: 38-9. The whole team played like I’ve always believed we could play. We started out with some solid hits, taking an early lead. Our defense was rock solid. As for me, I felt more in control of my pitching than I ever have before in my life, and I hit my first home run over the fence in a game. Our record for this season is now 1 and 9, but to me it feels like we just won the championship.

So – to all the guys who played last night:
Ron, Mark VA, Mark A, Morgan, Jplant, Kevin, Brian A, Joel, and Craig
Thanks for a great game!
To our fans who made it last night:
Jessica, Kara, Monica, Gary, Leslie, Carolyn, and Mark VA’s grandparents – and you too Rika
Thanks for coming – and your cheering made the game that much sweeter.

An informal poll last night tells me that I’m allowed to feel really good about the game for the next two weeks. I intend to make the most of that.