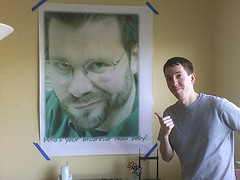 How do I explain this one?
Let’s see, back in ’00 my friend Steve moved to San Francisco to work as a software developer. Steve and I worked together at Calvin College for a few years and Steve was instrumental in teaching me a few things about writing web pages, and using photoshop. 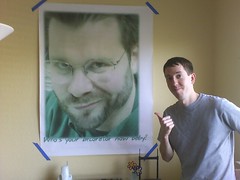 How do I explain this?

When Steve set up his web site Steve’s Apartment he sent out a challenge to people he knew stating that if you sent him something to put up on his wall, he would do it. He displayed a picture of the blank wall, and as items arrived, he updated the picture.

Not to leave Steve with an empty wall, I sent him a little something. My architect friend Steve printed it on his plotter for me, and helped me with a mailing tube. Steve put it up on his wall and left it there for a couple of months, and then back to the tube where it’s remained for the last 7 years. During that time, he changed jobs a few times and now works for Yahoo. He married Amy – a lovely young lady from West Michigan. And today, they make their home, not in an apartment as the web site suggests, but in a house and everything.

And that’s where I am now. I’m on vacation in San Francisco to visit Steve and Amy, and my Aunt Linda, and Uncle Bob. Steve and Amy placed this picture and a few other pictures of me on the walls of their guest room. I feel very much like an honored guest. Steve is one of the wackiest guys I know – thanks man.

One Reply to “explain this”