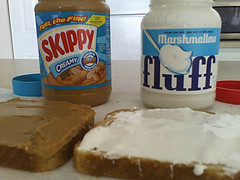 It’s been a long time since I’ve indulged in the sweet goodness of a Fluffernutter. If you’ve never had one, the recipe is simple. Clearly!

Ingredients:
2 pieces of sturdy bread (if peanut butter snags your bread, fluff will destroy it)
Peanut Butter (your favorite kind – I prefer Peter Pan, but it’s not available in the stores right now)
Fluff (there are plenty of knock-offs out there and they are mostly all good) 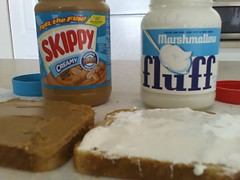 Directions:
Spread the peanut butter on one piece of bread.
Spread the fluff on the other.
Mush them together.

Enjoy with a glass of cold milk.

The strange thing is that as you work with the fluff in the jar, you appear to go through it pretty quickly, making you think that the Fluff is nearly gone when you’re done. Come back to the jar later, and the fluff has magically returned to nearly the same level where it was before.

Now some people would blame that on the way marshmallow is filled with air, and the mucilaginous nature of it. I say “magic”.

One Reply to “Fluffernutter”