↓ Skip to Main Content
Home › Wacky › Go to the mattresses

Go to the mattresses 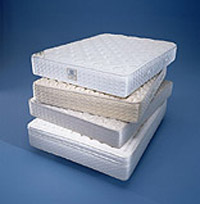 The time has come to buy a new bed.

It was time to go to the mattresses.

I visited a number of furniture stores and carefully avoided a particular chain of furniture stores. Hint – the sales staff descend on shoppers like a horde of locusts, and they advertise… a lot! And the initials of the store are “Art” “Van”. However, on a limited budget, I eventually walked through the doors.
I made a B-line for the mattresses and carefully avoided any eye contact that might encourage the sales-folk to pounce. I think they can smell you when you come in, or maybe they have chips installed in their heads that ping when the doors open. In any case, I wasn’t going to give them the opportunity to jump me.

After about 30 seconds in the mattresses, walking past the $3500 Tempurpedics and down to the other end, Jon showed up. I put on my “polite, but just looking” face and returned his greeting. He said,

“If you have any questions, I’ll be right over there,”

pointing to a kiosk across the way a bit.

I was shocked to say the least. No pitch, no fake friendliness. Where was I?

I found a mattress I wanted, the price was good, and I was ready to make a purchase. I looked up to see if Jon was around. There he was, right where he said he’d be. He hadn’t come around to check on me or anything. He did just what he said he would do. Weird.

He rang up my sale including a new mattress pad, which he carried out to my car for me. Then he thanked me for my business. Weird.

I felt that I needed to say something. I thanked him for his time and told him that I really appreciated the way he gave me the space I needed to make a purchase. Jon kinda smiled and said,

“Yeah, we know what the reputation is out there, and some of us are trying to change that.”

When I started this story, you might have had a visceral reaction to the words “Art Van”. You might have thought to yourself – No Way. I’m here to tell you that at least one person over there gets it and is trying to do the right thing. So, now I’m an Art Van evangelist?

I found the whole shebang to be a big metaphor for Christianity. My own experience was that I was really turned off to the hypocrites I knew. People who claimed to be Christians – all that love junk – but didn’t behave consistently with their talk. Then I met just a couple of people who were trying really hard to live the way they talked and their deep desire was to see me connect with the creator of the universe.

One person’s genuine faith and love made all the difference to me.

There’s a new book out there called unChristian. For Christians it’s a wake up call that Christianity has an image problem. Young Americans see Christians kind of the way I thought about the Art Van sales staff. If you don’t know what our reputation is, pick up the book and read it.

We know what the reputation is out there, and some of us are trying to change that. It’s time to go to the mattresses.

6 Comments on “Go to the mattresses”