↓ Skip to Main Content
Home › Digital Ministry › Good For You

As an American Christian, I might want to outlaw things that are not good for you. I’m not alone. On May 30, 2012, The Mayor of New York City, Michael Bloomberg, announced the Portion Cap Rule. It stated that sugary beverages could not exceed 16oz portions. Later that year, the Board of Health unanimously approved the limit, and it would go into effect 6 months later. The underlying reason was that larger portions made people fat. It’s not good for you, so we’ll make it illegal.

Trying to Do the Right Thing

Mayor Bloomberg and the NY Board of Health thought they were doing the right thing by banning large sodas. I’m sure they did. They knew that it wasn’t good for us to drink that much soda. So, they sought to protect us from ourselves by making the large sodas illegal. However, we live in a country that provides freedoms. We have freedom of worship, of speech, of the press, to assemble, and to petition the government. All of those are right there in the Bill of Rights, in the very first amendment to the US Constitution. No, the freedom to drink a GINORMO-GULP isn’t listed in there specifically, and yet, everyone knows that drinking large portions of sugary beverages isn’t good for you. Of course it isn’t. We all know we should drink more water. But you know what? We like drinking soda (or “pop” where I grew up, and where I live now). We like it, and we should be free to drink big portions because we want to, and we don’t care if it isn’t good for us. This is America! Sure enough, the New York Court of Appeals overturned the ban on June 26, 2014. USA! USA! USA!

Many people view the Bible as a list of things not to do. Don’t worship other Gods, don’t make idols, don’t misuse God’s name, don’t violate the Sabbath, don’t dishonor your parents, don’t murder, don’t have sex outside of marriage, don’t steal, don’t lie, don’t want stuff that isn’t yours. That’s a “don’t do” paraphrase of the 10 Commandments, right out of Exodus 20. The actual 10 are a mix of dos and don’ts, not just don’ts, but for the sake of argument there they are in their “don’t” form. So there you go. One of the most famous parts of the Bible is all about prohibiting certain behaviors. And God requires obedience right? Where’s the freedom in that? As an American Christian, I want freedom with my obedience!

The Trouble With Freedom

There’s a struggle for Americans when it comes to Christianity. Our society has moved steadily toward more and more freedoms over time. Most recently, the freedom to marry someone of the same gender. There’s a lot of handwringing about that from Christians. There’s a lot of finger-pointing and name-calling that goes with that. Marijuana for recreational use is legal in many states, legal for medical uses in others, and in some places possession of this controlled substance is equivalent to a parking ticket, while federally it will put you behind bars for a very long time. I don’t remember Christians getting bent out of shape over the Portion Cap Rule in NY, and yet as Christians, we know that behavior isn’t good for us. Should we have been on the banning bandwagon?

I’d like to paraphrase Uncle Ben. You know, Uncle Ben from Spider-Man? He said, “With great power, comes great responsibility.”

In reality, I’m quoting from 1 Corinthians 10:23. Here it is in several versions.

1 Corinthians 10:23 (CEV)
Some of you say, “We can do whatever we want to!” But I tell you that not everything may be good or helpful.

The true key to that section of scripture comes later in verse 25: “Eat anything sold in the meat market without raising questions of conscience,” (NIV). Paul is referring to adjusting your behavior, so that you don’t offend someone else. He’s not talking about the kind of knee-jerk reactionary “I’m Offended” speech that is so popular right now. He’s talking about a genuine care… let’s call it “love” for other people. Another way to put it is, it’s not polite to eat bacon in front of an observant Jew, or it’s impolite to set out an open bar in front of a recovering alcoholic. Can you eat and drink what you want, yes, but be mindful of others.

In the various translations, the scripture is preceded by a heading. Some of them are:

In this context, I’m talking about our freedom, and how to use it to show people who God is, and what he’s done. Again, in an American Christian context, it might read: “With great personal freedom, comes great personal responsibility.” We could say that we have the freedom to do whatever we like, but we have the responsibility to curb our appetites, and do only those things that are good for us, and good for others. Boy! That really opens up a can of worms doesn’t it? You start questioning your choices for where you work, where you live, how you live, the products you buy, the places you shop, the car you drive, the food you eat, the size of the soda you drink, everything. We know that if certain things are illegal, people won’t do them (note sarcasm). People can’t buy a 20oz soda – problem solved! Sort of. People just bought two 12oz or two 16oz beverages and drank them (for a total of 24oz or 32oz) one… after… the other. Let’s just make everything that is harmful illegal, and then we won’t have to worry about it (note more sarcasm)!

Before we do that, let’s look at the First Amendment.

Amendment I
Congress shall make no law respecting an establishment of religion, or prohibiting the free exercise thereof; or abridging the freedom of speech, or of the press; or the right of the people peaceably to assemble, and to petition the government for a redress of grievances.

Oh, and we’re asked to manage our own behavior so that we don’t cause someone else trouble.

Do you see the trouble there? Being a Christian and an American is actually pretty tough because of this tension. It’s no wonder people struggle with it and draw lines regarding behaviors that are or are not legal. It’s difficult to reconcile things that we know are right and wrong, and then watch culture, and then our own elected government, make those things legal or illegal. As Christians, we have a preexisting set of laws that tell us how things are supposed to be. We read how the world was created, and we know that it was perfect. Then, we screwed it up because we wanted our personal freedom. So, now our broken world spins on, getting more and more broken until Jesus comes back, and sets everything back to the created order. It’s entropy, but there’s a promise of restoration.

Outlaw What Isn’t Good for You 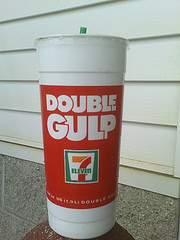 As Christians, we’re not going to agree with lots of things that are made legal. It’s going to hurt. We’re going to want to prevent murder by outlawing guns, knives, pointed sticks, and abortions. We’re going to want to preserve the sanctity of marriage by prohibiting people from marrying who they want to, not to mention pornography, and divorce. We will want to protect ourselves and people from themselves by outlawing certain drug and alcohol use. We’re going to want to outlaw the drinking of large sodas, because we know what’s good for you. But we can’t. We can’t if we want to live our lives the way we feel called to. If we want to be Christians, in a country that permits it, we have to let people do what they want. We do have the responsibility to confront sin, when we have a relationship with someone, and have the right to speak into their lives. More importantly, we have the responsibility to live the way Jesus teaches us. Love God, love your neighbors, love the those with whom you disagree, love your enemies.

“You have heard that it was said, ‘Love your neighbor and hate your enemy.’ But I tell you, love your enemies and pray for those who persecute you, that you may be children of your Father in heaven. He causes his sun to rise on the evil and the good, and sends rain on the righteous and the unrighteous. If you love those who love you, what reward will you get? Are not even the tax collectors doing that? And if you greet only your own people, what are you doing more than others? Do not even pagans do that? Be perfect, therefore, as your heavenly Father is perfect.”
Matthew 5:43-48 (NIV)

It’s that “loving others” thing that Paul is talking about as well.

Love Who You Want

The phrase, “Love who you want” has shown up in the struggle over the marriage equality Supreme Court decision. Jesus didn’t give us that option. He tells us to be loving to everyone. That’s tough. I struggle with this stuff too. As American Christians we tend toward either showing people that God doesn’t love people who do the wrong thing, or that God loves us and is fine with us doing whatever we want. Neither are true about God. We are to love people and show them that God loves them right where they are, and wants us all to become the best version of ourselves – the way he sees us. That’s really difficult. It’s not just hard to love people unconditionally, it’s impossible to really know how God sees someone. So, our default position must be a loving one. Loving doesn’t mean wanting someone to be happy. Loving means helping someone, your friend, your spouse, your child, your coworker, your frenemy, your arch-nemeses, become who God created them to be. And, there again, we can’t know what that is, so we end up focusing on other people’s behaviors, instead of our own hearts and minds. It makes you want to go down into your dark basement and wait for Jesus doesn’t it?

The promises below (or if you prefer – prayer) help me, maybe they’ll help you.