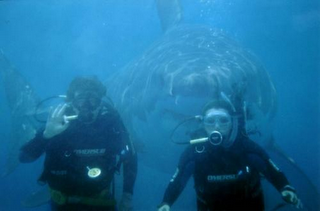 The French call April 1, Poisson d’Avril – or literally translated “The Fish of April”. Traditionally, school children tape a picture of a fish onto the back of a schoolmate who then cries out “Poisson d’Avril!”

when they discover they’ve been, as Ashton says, “Punked.”

Here on the Wacky page, April 1 is a bit like Christmas. I look forward to the variety of hoaxes perpetrated by some great pranksters out there. Last year’s Google hoax was particularly fun.

This year, I had the fun of setting up a little something that goes live on April 1.

I’m supervising a weekly blog for the community I manage as part of my work and we blog every Tuesday. This week, Tuesday happens to be April 1, so I couldn’t resist. The posts are usually about what’s happening in the community, with our members, or internet ministry in general. Over the last few months we’ve been phasing out one site: Gospelcom.net in favor of Gospel.com and next month we’re taking the old site down entirely and pointing it to the new one. The new site has been incredibly successful so far. How successful?

Here’s the gist of the blog…
Since Gospel.com has been so successful Google might buy us out. The Gospel.com brand name is so valuable that we’re going to offer some services with the Gospel.com identity; services like Gospel.com email – or Gmail for short. We’ve even launched a new website showing the merger of Gospel.com and Google – Googspel.

Of course that prospect is ludicrous and Google has no interest in the Gospel, let alone Gospel.com. I realize that for most people it’s not all that funny, but to us it’s hilarious.

The thing about trying to reach people for Jesus is that sometimes people see it as just a big April Fools Day joke. The rug’s been pulled out from under them so many times that they can’t trust people. When someone says that they love me, I tend to shy away. And if they tell me that they are going to love me, that makes me even more nervous.

But here’s what I’ve learned. People fail. People fail all the time. I fail ALL THE TIME. I fail my friends, my family, my employer, the ministries for which I’m responsible. I mess up ALL THE TIME. It took me the better part of my life to figure out that God doesn’t mess up, doesn’t let me down, and doesn’t fail. God is exactly who he says he is.

Our own histories and experience with people have skewed our perception of who God is, but when you really read what he says about himself, it’s a very different picture than what we’ve thought for so long. Our culture has been throwing us a red herring for years about God. It’s time that we pull that fish off of our backs and yell, “Poisson d’Avril!” one last time, and go see who Jesus really is.