↓ Skip to Main Content
Home › Brian-Food › I Kin Do It

I Kin Do It 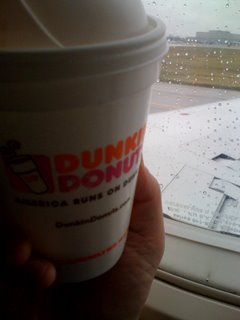 I’m on my way to BibleTech in Seattle. My flights are scheduled to go from PHL to Dulles, to Seattle. That’s two Washingtons in one day – nice.

I breakfasted at the airport Dunkin Donuts. They have two ad campaigns going right now.
1) America Runs On Dunkin
2) You Kin Do It

The second campaign shows people in impossible situations overcoming them. How? Why – because they have a cup of Dunkin Donuts coffee or a donut, or a waffle-sandwich.

I needed to get from my new home airport to Washington DC – Dulles in time to catch the next flight to Seattle, but there are roadblocks. Getting out on the runway and staying there for 40 minutes with the engines shut down so we don’t have to go back to the gate to refuel is this particular hurdle.

But – I realized – I still had some Dunkin Coffee. I’m all set I guess.

Brian Atkinson is a comedian, voice actor, MC, and former radio personality. His sharp, smart comedic style has been a hit at clubs, corporate events, and festivals across the country including Bonkerz, Dr. Grins, Sunday Night Funnies, Punchlines and Gilda’s Laugh Fest. You can find his audio books on Audible, Amazon, and iTunes. Brian and his lovely wife Holly live in Grand Rapids and he has a lot of t-shirts.