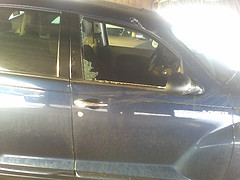 I hope this isn’t a sign of things to come. I went out to my car this morning – headed to church – and when I clicked my little key fob to unlock the doors, the alarm went off. At first, I thought it was because I pushed the wrong button, but then I realized that there was something wrong.
Something very wrong.
There’s glass all over the place.
Someone tried to break into my car last night and was successful – with a brick. Half of the brick is sitting outside the car, and half of it is inside. In this picture you can see the dents they made in the door frame near the top when they must have been throwing that brick over and over. These would-be thieves also have bad aim.
I had my new GPS and my iPod in plain site. Yes, I’m that dumb. I’m grateful that they didn’t actually take anything. Since they were successful at eventually breaking into the MirthMobile, but didn’t take anything, I’m guessing that the alarm did go off and scare them away. That would also explain why the alarm sounded when I tried to unlock the car at the beginning.
Now some thankful moments…
1) Thanks to Tiffany over at Progressive. She was very nice and made the process of reporting my claim easy.
2) Thanks to Officer Brian Barry from the Kentwood Police Department for coming around and making the police report easy.
3) I’m thankful that they didn’t take anything.
Now some dork moments…
1) There’s snow all around the carport – meaning that indeed there are footprints in the snow leading to and leading away from my car.
2) I mocked myself for the CSI-type of thoughts I had.
3) I’m pretty sure that the foot prints are from Converse sneakers, about a men’s size 9.
I shared my self mocking with Officer Brian and he also mocked me… “We can probably get some casts of these prints… naaaaahhh”