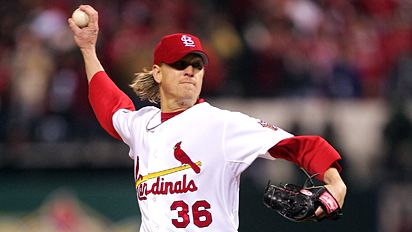 The steam is being let out of the hot dog vendors carts tonight. The Tigers totally deserved to be in the World Series this year, and their season was miraculous. I, on the otherhand am tickled pink, nay – Cardinal red – today. St. Louis won the World Series.

Growing up in Chicago, it was only natural that I was a Cubs fan. Spending summers with my grandfather in Northwest Iowa, gave me a choice between following the White Sox for the summer or the Cardinals. I couldn’t follow the Sox, and I wasn’t aware enough to understand that the Cardinals were the arch-enemies of the Cubs. So I’ve grown up as kind of a contradiction. Now, nearly 40 years old, I’ve followed both the Cubs and the Cards, forsaking all others and in some cases my sanity, until today.

Living in Michigan, there are as many Cubs fans on the West side of the state as there are Tigers fans. I can imagine the sour expressions on the faces of my friends of both ilk. It’s going to be a rough week.

Time to pack away the hot dogs, popcorn, peanuts, crackerjack and stadium nachos until next year. Thanks for a great season red-birds!