Skate Where the Puck is Going 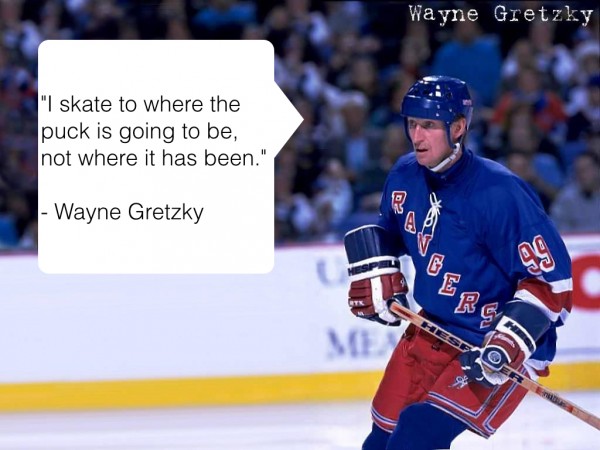 Clairvoyance isn’t one of my spiritual gifts. I’ll go out on a limb and say that Wayne Gretzky, “The Great One,” didn’t have it either. He did have the ability to look at the players on the ice, and see where the puck was going, and go there. 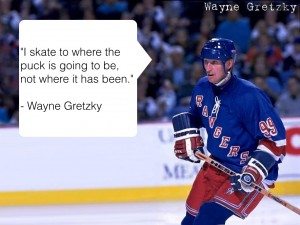 I skate to where the puck is going to be, not where it has been.
– Wayne Gretzky

I’ve never played any form of hockey, other than floor hockey in gym class, or air hockey at the arcade (ok – some tonsil hockey with my wife). I really don’t know much about the sport. I’ve been to a few games. I have friends who’ve played and some who idolize “The Great One” as a player. I never saw Gretzky play. I’m not even much of a hockey fan (except for the aforementioned hockey with my wife). But I totally get what Gretzky meant when he famously talked about skating to where the puck is going, instead of where it’s been.

3 Steps To Skating in The Right Direction

Second, you need to be conscious of your environment. You need to be aware of how communication tools change our culture, and how they change the way people think and understand each other. You can’t ignore the other players on the ice, or for that matter, the ice itself. You don’t have to like the use of auto-tuner in pop music (no one should), but you need to at least know what’s going on out there. You’re not going to like or approve of everything you see in the digital world. Thankfully, it’s not your job to correct it.

Third, you need to pay attention to the motion of the puck, and how the other players act on it. You can’t assume that just because things have always been a certain way, that they will continue to be that way. We have been witness to tremendous cultural changes in our lifetimes. Those changes, precipitated by the communication tools we reach and how those tools change the way we relate with one-another, are as inevitable as time passing.

You Know Digital is Now

Finally, as well as being aware of who you’re trying to reach, your environment, and where things are going, you also need to actually do something.

You miss 100 percent of the shots you never take.
– Wayne Gretzky