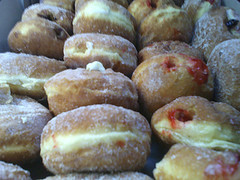 Three Years of Brian-Food and 100 posts – a retrospective.

It was on June 8, 2005 that I first posted about breakfast cereal. I’d been blogging since 1995 with my Wacky Thing of The Week – before there were blogs. I first started with internet fun available on a shared drive for my co-workers, and then started putting them on the web in ’97 when I learned how and registered mirthmobile.com. But Brian-Food was/is my first actual blog as we understand it today. I thought a great way to celebrate this milestone might be through reflection.

Some of my favorite food topics center on the elixir of life – Coca-Cola:
Zero
Black
Flavors
The Real Thing
I’ve switched over almost entirely to Coke Zero now, but now and then I have to get the good stuff. 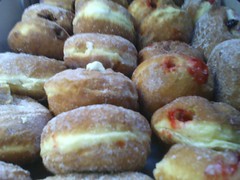 I also find oddities in my food:
Bones
Things
Stuff

I try to take pictures before or while I’m eating. This is one of my favorites.

One of my favorite posts focused on the story I made up about the guy at my local Taco Bell. For a while there “Chipotle Grilled Stuffed Burrito” was the #4 referring keyword to my site and MirthMobile was the #1 hit on Google with the words “Chipotle Grilled Stuffed Burrito”. Now, thanks to the magic of blogs, it’s #1 and #2. Give this post a couple of weeks and I’ll have that #3 spot locked up as well.

I try to come up with catchy titles for my posts like:
Thank you very mocha
What up G
Unfortune cookies
and…
Shout out to my peeps
By the way, I still have some of those peeps drying nicely in my cupboard.

I also try to feature the gastronomic gyrations of my friends. Steve shows up from time to time, but his best work has to be the giant gumball in Mouthfull of pain. (not for the faint of heart)

Not everyone may agree with what I write, after all – I have my rules, but I hope the past three years have been entertaining and possibly enlightening for you gentle reader.

… on the other hand, maybe it’s just me.

One Reply to “Table Scraps”