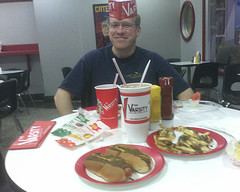 This week I’m in Atlanta with my co-worker Dave for the Catalyst Conference. Our plane from Grand Rapids to Milwaukee was canceled due to weather, so we got a direct flight to Atlanta on another Airline. Midwest handled the cancellation with ease and we were soon on a Delta flight without any effort except for the extra security pat-downs.

We landed and got our luggage at the speed of light – seriously, I don’t know how they did that. It was amazing. Then checked into the hotel – which is hilarious in its own right. Then off to get something for dinner.

The Varsity
It claims to be the world’s largest drive-in. The one we went to was not really a drive-in as much as it was a drive-up-get-out-of-your-car-walk-inside. But I digress. They have Chili Dogs.

The chili is almost entirely meat, with a touch of sauce. The meat is so finely ground that it resembles Cream of Wheat or since we’re in the South, grits. The chocolate shake was similar in consistency to a Wendy’s Frosty, but after a few minutes with a spoon, drinkable. Chili-cheese fries are fries, served with a little cup of chili and a little cup of very runny cheese. I know what you’re thinking – “oh! I like it runny” – if indeed that’s what you’re thinking, then by all means, this is the cheese for you.

I really didn’t eat much today – so now that I’ve pigged out and capped it all off with a fried peach pie – I’m going to bed.

3 Replies to “The Varsity”