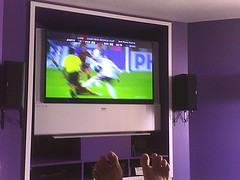 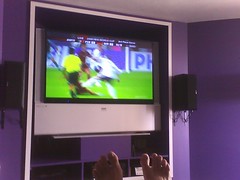 I’m watching the World Cup at home on this fine Saturday afternoon. Germany has just scored the first of two goals that happened in quick succession. (a third followed while I was typing this – by the same guy!) Two Goals! That’s huge in “Futball”! Soccer wasn’t really an option when I was a kid, so I don’t share the passion for it that some of my younger friends do. Putting that aside, I think there are a few reasons that Soccer will have trouble being a commercial success here in the United States.

1) No commercials. Sure, there are ads all the way around the stadium, and the simple banner ad in the scoreboard at the top of the screen, but it’s not enough to create the top of mind awareness that advertisers expect.

2) Not enough scoring. Even baseball doesn’t move at this this pace.

3) No breaks in play (see #1) to get snacky things. Either on TV or in the stadium. The half-time is too short for attendees to hit the head and the concession stands.

4) Simple Math. The clock counts up, and not down. Americans want to know how much time is left in a game, without doing math. Yeah, we’re kinda dumb like that.

5) Referees. The little guys look like they’re going to get killed out there. Let’s move Ed Hochuli from the NFL to the MLS and see what happens.

By all means, prove me wrong America! Let’s rally together and make World Cup soccer as big a deal as the superbowl, world series, and final four.

Finally, Budweiser, you get a full-moon out the car window the next time I’m in St. Louis. Here’s why:

An American Beer company sponsored the World Cup, in Germany. I’m not a drinker. I’ve never had a beer. (seriously) But this I know. American beer is like making love in a canoe. (you can look that joke up on google) Germany – didn’t they invent beer? Shouldn’t a German beer be the “official beer of the world cup”? I’m just saying that in the scope of ranking beer for the quality factor, Budweiser has got to be near the bottom of the pile and anything out of Germany has got to be better. It’s embarrassing for me as an American to be associated with that kind of stupidity. Budweiser of course can’t even use the name “Budweiser” in Germany, because there is already another beer with that name. It’s now called Anheuser Bush “Bud”. The horror…

But that’s not the worst of it. (read on)

Going Dutch gained a whole new meaning with this World Cup. Last Friday, at the Stuttgart stadium in Germany, scores of fans from the Netherlands, up to 1,000 according to some reports, watched their team’s match in their underwear. It wasn’t due to the alleged Dutch aversion to part with hard currency (for clothes or much else). No, the fans showed up fully dressed but were stripped down to boxers and briefs because their pants violated the strict rules of FIFA, soccer’s global authority.

Please interpret that in this way. Budweiser didn’t want another beer logo displayed in any way during the match. So they wouldn’t let the Hollanders into the stadium with the orange pants. A hearty hats (and other articles of clothing) off to the Dutch people who said, “fine, take the pants.” and stripped down to their underthings at the entrance to the stadium. Nice going Netherlands – too bad you were stinky sports in the game vs Portugal.